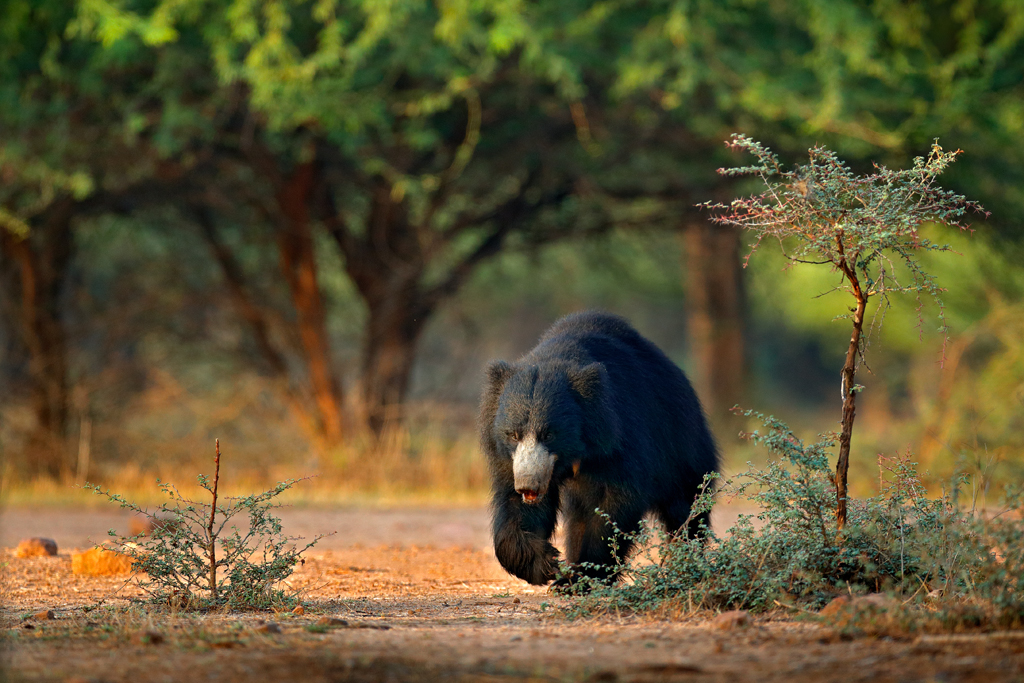 Gujarat boasts of an enviable ecological reserve due to its unique geographical and climatic conditions. The sincere efforts of the government have ensured that the many sanctuaries and wildlife reserves of Gujarat get proper recognition. Amongst the wildlife sanctuaries of Gujarat…the sloth bear sanctuary deserves special mention for its large population of sloth bears and exotic fauna. A sloth is a mammal which hangs upside down from tree branches. Epithet travelers and hunters in India gave the name to the bear when they saw it hanging upside down from branches of the trees. Initially, in the 18th century, it was called “bear sloth”, as the hunters identified this species with the sloth of South America. But in the early 19th century, in France, it was examined and identified correctly as bear species and thereafter the name was changed to “sloth bear”. You will find Sloth Bear in the Jessore Sloth Bear Sanctuary in the Banaskantha District of Gujarat at the Gujarat – Rajasthan border.

This place was declared as a sanctuary in May 1978. It has an area of about 180 square kilometers, principally to protect and propagate the sloth bear.

Location & Characteristic Features of the Sanctuary

The sanctuary is located in the Jessore Hills of Aravalli Hills, to the south of Thar Desert. The Jessore Hill is the second highest peak in Gujarat. The nearest railway station is Palanpur – 45 kilometers away and Iqbalgadh (8 km). The nearest airport is pretty far off…Ahmedabad and that’s 178 km away. The best way to reach the sanctuary is to get down at the airport/ station and hire a cab from a reputed travel service operator.

The sanctuary area lies between the desert ecosystem and the dry deciduous ecosystem. The sanctuary also has two temples. One of them is the Kedarnath Mahadev temple which is frequented by a large number of pilgrims and a protected sacred groove. The forest of the sanctuary plays an important role in the conservation of depletion Aravalli ecosystem as it acts as a natural buffer.

In the Sanctuary, the vegetation is dry for semi-dry and dry trees, thorny bush. As per a recent UNDP sponsored study, the flora of the sanctuary consists of plants where 90 trees, 47 shrubs, 33 climbers, 194 herbs, 31 kinds of grass, six pteridophytes, two bryophytes, one epiphyte and two fungi. On further analysis, the families of tree species are 13, shrubs 15, herbs 11 and climbers 13…which makes the vegetation pretty diverse.

However, forest area is reportedly decreasing and forests of the Aravalli hill areas also have to be reduced, which is rejecting the stay of the bear. As a result, the forest areas are reported only in patches. This is an issue commanding immediate attention of the government.

Other than sloth bear, fauna reported in the sanctuary are the leopard, sambar, blue bull, wild boar, porcupine and a variety of birds. Other endangered species established by the sanctuary include Jungle Cat, Civet, Caracal, Wolf, and Hyena. Apart from this 14 species of amphibians and reptiles have been recorded. The list includes Indian Python, Indian flapped shelled turtle, mugger, and varnas. Threats faced by the above species have been noted as water shortage, traffic, and hunting by snake charmers.

The identity of 20 species of mammalian species is threatening and weak near this Indian pangolin and lazy bear respectively. This sloth bear is found in many parts of Asia including Nepal, Sri Lanka, Bhutan and Bangladesh. Its two subspecies are Indian and Sri Lankan sloth bear. The Indian Sloth bear is omnivores, black and dark brown in color with the yellowish patch on the chest. It has large feet and claws, 5-6 feet tall, and weighs around 79 to 141 kilograms. Females can run as fast as humans and have a long muzzle. They can survive in the dry or wet rain forest or grasslands. They eat insects, termites, live on fruits, grass, and honey. They are endowed with high sensory perception.

By Road: Ambaji is in Danta Taluka of Banaskantha district, near the Gujarat-Rajasthan border. The walk from the bus station to the temple is less than one kilometer, under a roofed walkway. Direct buses are available from many places, including Mount Abu, 45 km away, Palanpur, 65 km away, Ahmedabad, and Idar.

By Rail: The nearest Railway Station is Palanpur – 75 km.

By Air: The nearest airport is Ahmedabad (213 km).