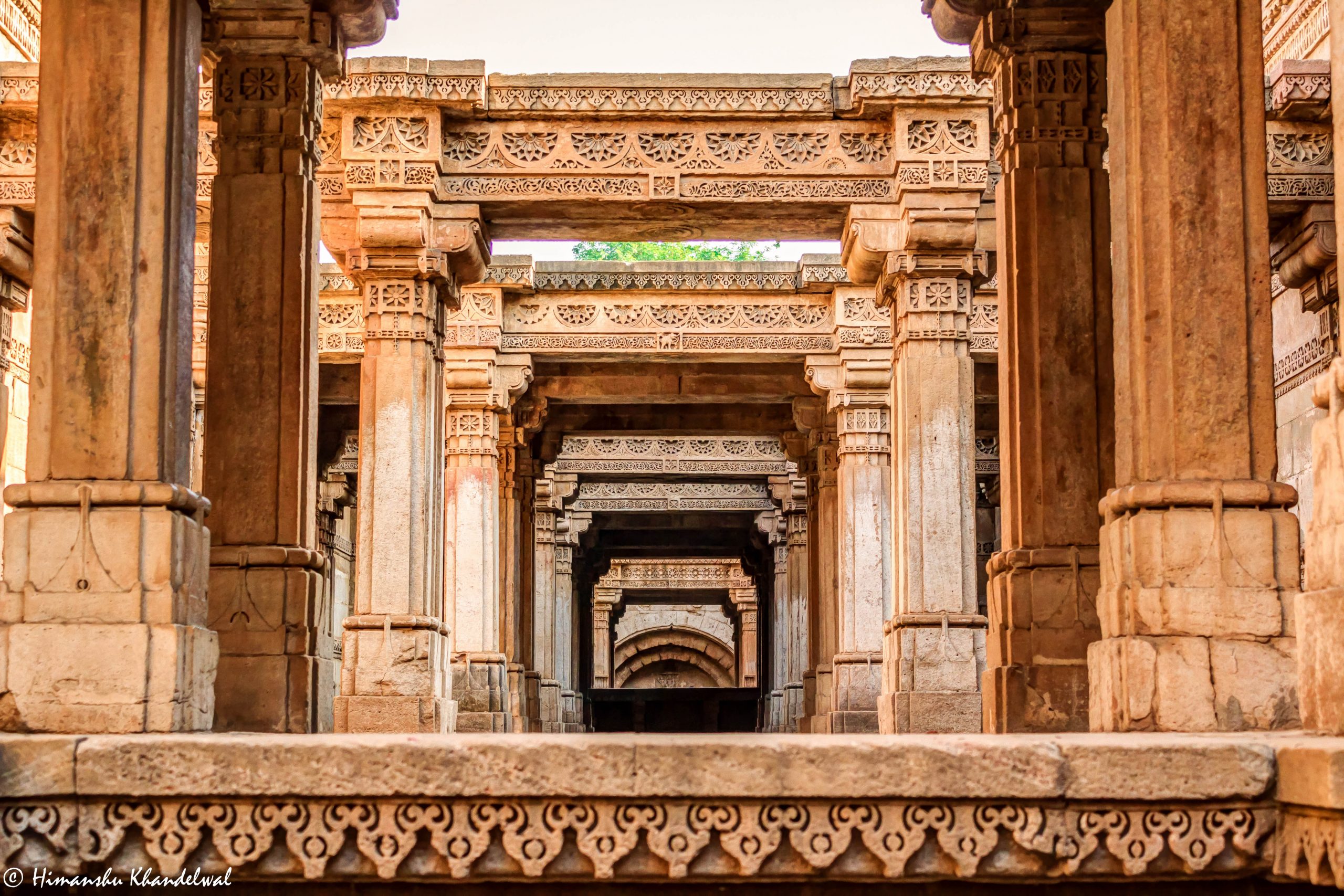 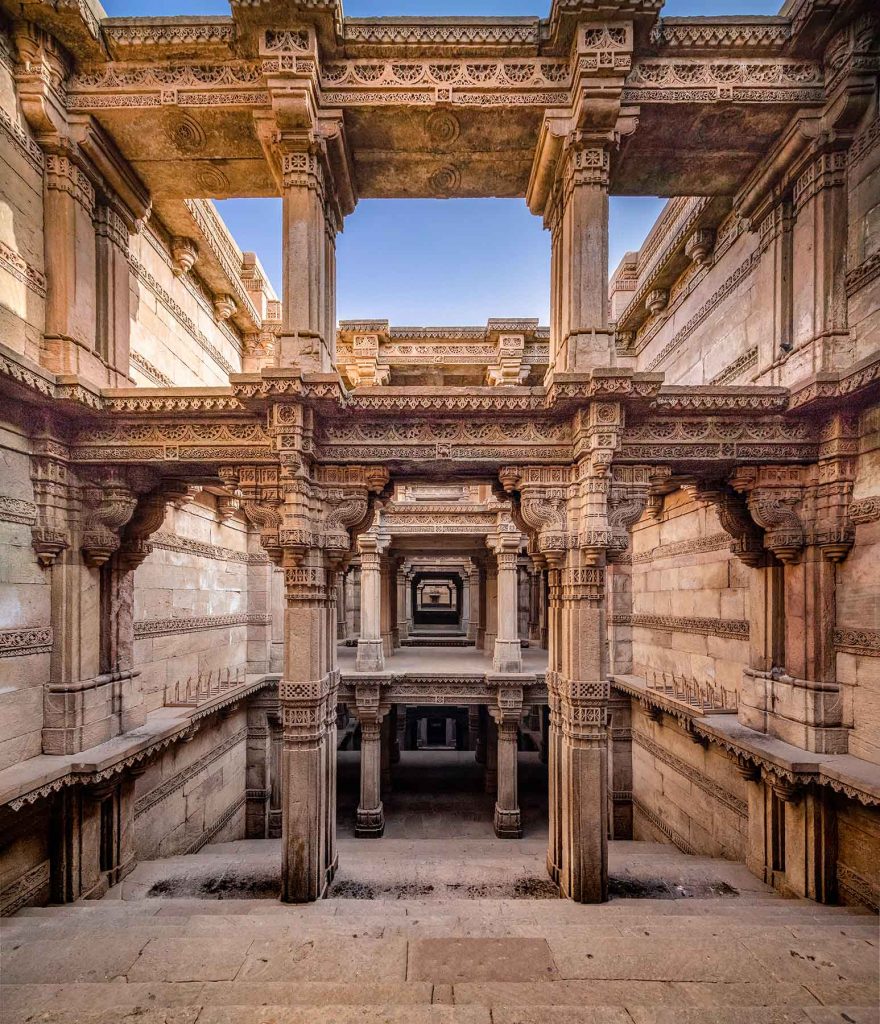 Set in the quiet village of Adalaj, this vav has served as a resting place for hundreds of years for many pilgrims and caravans along their trade routes. Built in 1499 by Queen Rudabai, wife of the Vaghela chief, Veersinh, this five-storey stepwell was not just a cultural and utilitarian space, but also a spiritual refuge. It is believed that villagers would come everyday in the morning to fill water, offer prayers to the deities carved into the walls and interact with each other in the cool shade of the vav. There is an opening in the ceilings above the landing which allows the light and air to enter the octagonal well. However, direct sunlight does not touch the flight of steps or landings except for a brief period at noon. Hence some researchers say that the atmosphere inside the well is six degrees cooler than the outside.

Another remarkable feature of this stepwell is that out of the many stepwells in Gujarat, it is the only one with three entrance stairs. All three stairs meet at the first storey, underground in a huge square platform, which has an octagonal opening on top. The vav is a spectacular example of Indo-Islamic architecture and design. The harmonious play of intricate Islamic floral patterns seamlessly fusing into Hindu and Jain symbolism embody the culture and ethos of those times. All the walls carved by ornamentation, mythological scenes along with everyday scenes of women churning buttermilk, dancers accompanied by musicians, women adorning themselves and a king sitting on a stool. Fascinating to many visitors is the Ami Khumbor (a pot that contains the water of life) and the Kalp Vriksha (a tree of life) carved out of a single slab of stone. There is a belief that the small frieze of navagraha (nine-planets) towards the edge of the well protects the monument from evil spirits.

The Adalaj step well or ‘Vav’, as it is called in Gujarati, is intricately carved and is five stories deep. It was built in 1498. The history of the Adalaj step-well is established by an inscription in Sanskrit found on a marble slab positioned in a recess on the first floor, from the eastern entry to the well. Its construction was started by Rana Veer Singh of the Vaghela dynasty of Dandai Desh. But he was killed in a war, whereafter the Muslim king Mahmud Begada of a neighbouring state built it in Indo-Islamic architectural style, in 1499.

The Sanskrit inscription in the stepwell describes,

“Samvat 1555 (1498 AD), month of Magha, Mahmud Padshah being king.
“Salutation to Vinayaka (Ganesha) to whose race belonged King Mokala, chief of the country of Dandahi. From him was born Karna, whose son was Mularaja. Mahipa was Mularaja’s son, and Virsinh and Naisha were the sons of Mahipa. Virsinh’s queen, whose name is Rooda, has constructed this well.
“It is dedicated at this time – when the sun is in the north, the month is Magha, the bright half (Shukla Paksha), the 5th day, the day of the week, Wednesday, the lunar mansion – Uttara, Karana-Bava, the yoga – Siddhi.”

Then follows a glowing description of the well, after which the queen, or rather lady of the chief, is praised in a few verses; the expense is stated at 5,00,111 tankas, or over five lakhs, and the whole ends with a repetition of the date as given above.

The cultural and architectural depiction in the deep wells at various levels are a tribute to the history of step wells, built initially by Hindus and subsequently ornamented and blended with Islamic architecture during the Muslim rule.

By Rail: The main railway station is located in Kalupur area. This station falls under the prominent national railway circuit and is connected to all major cities of India. If you are on the western side of the Sabarmati river, then you can go to the Gandhigram station near Ashram road to buy your railway tickets easily.

By Air: Sardar Vallabhbhai Patel airport at Ahmedabad is an international airport with direct flights to the USA, UK, Singapore, Dubai and other international hubs. Numerous domestic flights are also operational from here.