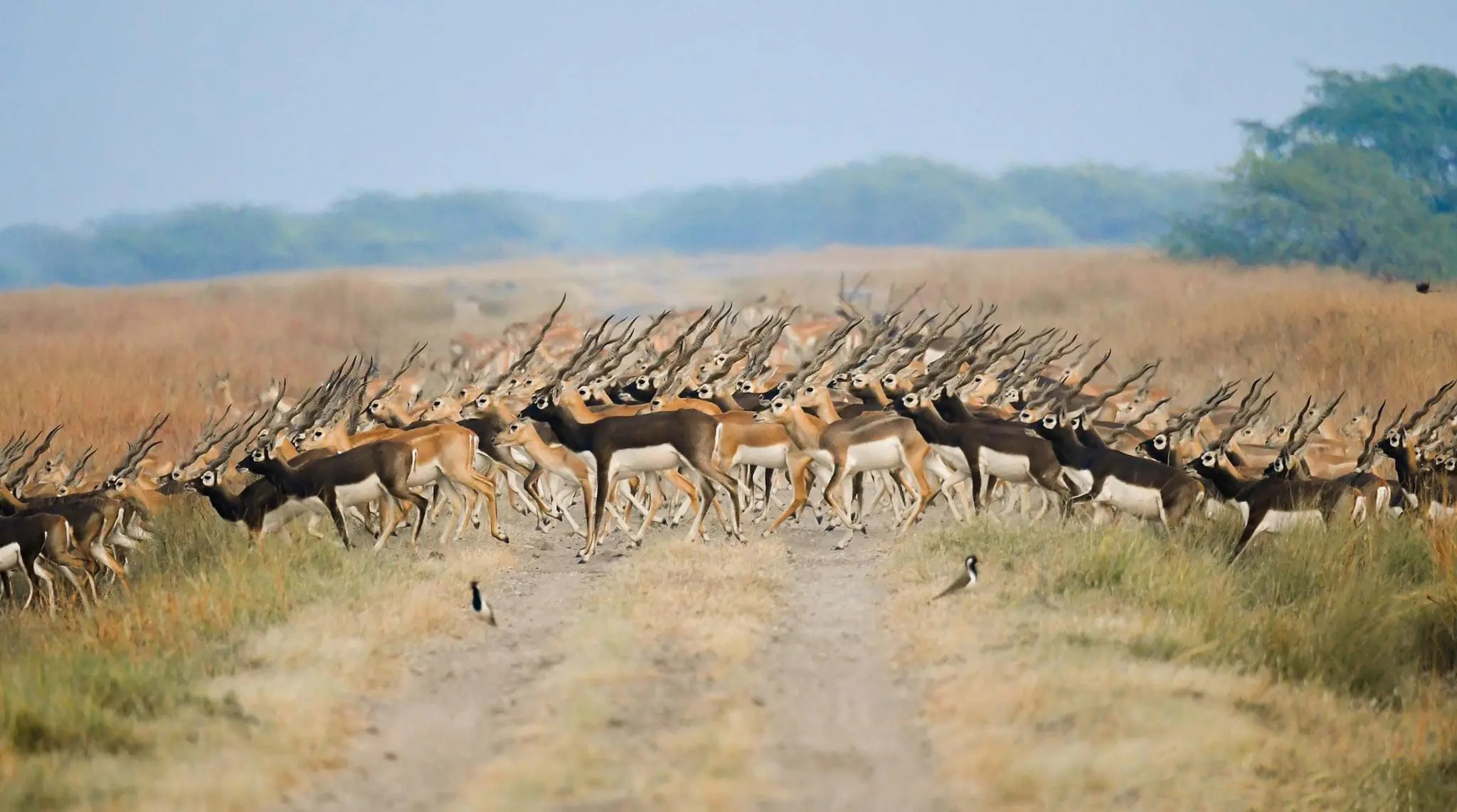 Blackbuck National Park is a national park in India located at Velavadar in the Bhavnagar District of Gujarat state, India.

Established in 1976 in the Bhal region of Saurashtra, the park is located around 42 km from the district headquarters city of Bhavnagar. Hugging the coasts of the Gulf of Khambhat on the south, it is spread over an area of 34.08 km2, which was primarily a “vidi” (grassland) of the maharaja of the princely state of Bhavnagar for hunting the blackbucks with his famous hunting cheetahs. On the northern side, it is surrounded by wastelands and agriculture fields. The national park has been classified as 4B Gujarat-Rajwada biotic province of semi-arid bio-geographical zone.

Flat land, dry grasses and herds of antelope have always attracted visitors to this park which has a grassland ecosystem. Successful conservation programs for the blackbuck, wolf and lesser florican (a bustard) are ongoing. Considered to be an endemic Indian species, the lesser florican, which once lived throughout the country, has become endangered in recent decades. Today, the largest population is in this park. Local wolf numbers are increasing, as are striped hyena, with sightings quite frequent during daylight in winter 2012-2013.

A southern portion of the park, which adjoins the Gulf of Khambhat, is in the Gulf’s high tide zone and gets inundated with water. However, its semi-arid conditions, together with this inundation of seawater during monsoon, creates habitats suitable for various dependent fauna of the park.

According to a remote sensing study of habitat types, the park area is classified as follows:

The mudflats are the high tide zones of Gulf of Khambhat and the lower part is prone to flooding.

There are some names of wildlife of blackbuck National park blackbucks, wolves, Macqueen’s bustards, hyenas and lesser floricans, with foxes, jackals and jungle cats as the main carnivores. Other species include wild pigs, hares and rodents typical of the savannah type grasslands and thorn scrubs.

Among birds, sandgrouse and larks are [1] seen in fair numbers. According to Roger Geoffrey Clarke, the British harrier-expert, the harrier roost found at the park is one of the largest in the world.

By Rail: You can opt for a train to connect to Ahmedabad and Mumbai with frequent connections.

By Air: Bhavnagar Airport is about 3.5km from town and is reasonably well connected to major cities of India.